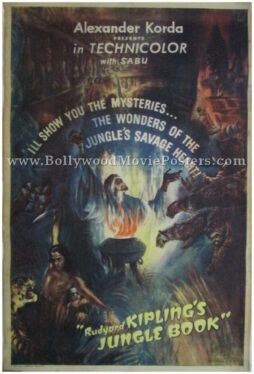 This is an actual surviving poster of the 1959 classic, The Chaplin Revue, which was released in India by the National Film Development Corporation of India (NFDC).

The Chaplin Revue is a 1959 film comprising three silent films made by Charlie Chaplin, namely A Dog’s Life, Shoulder Arms and The Pilgrim, with all three films starring Chaplin’s iconic character, The Tramp.

After his last three films, namely Monsieur Verdoux, Limelight and A King in New York failed to attain universal acclaim, Charlie Chaplin’s star power was fading. The Chaplin Revue was an effort to revive his role as The Tramp for modern audiences.

Designed, printed and circulated in India somewhere in the 1970s/1980s during the film’s release in India, this Charlie Chaplin movie poster was originally intended for publicity but never ended up being used.

This original Charlie Chaplin India poster features Charlie Chaplin in his trademark Tramp character. Set against a light green background, the poster carries an announcement at the top that reads, “World’s Funniest Things Happen With Chaplin & He Makes The World Laugh!.”

The letter C is capitalized in a large stylized font and makes for an interesting design when juxtaposed with still photographs within.