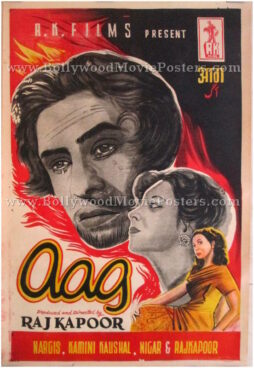 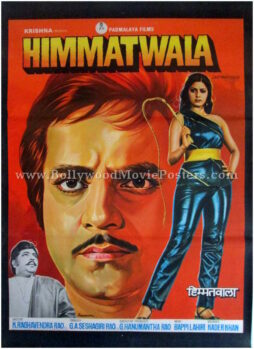 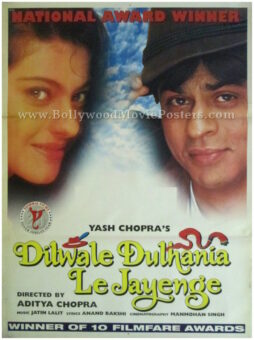 This is an actual surviving old Bollywood poster for sale of the 1948 film that was produced and directed by the “greatest showman of Indian cinema” (also known as “the Clark Gable of the Indian film industry”), Raj Kapoor.

Aag was the first film in which Raj Kapoor and Nargis appeared together, making this old Bollywood poster highly collectible!

After Aag, Raj Kapoor and Nargis appeared in another 15 films together, becoming the most iconic on screen couple in the history of Indian cinema.

This Raj Kapoor poster was originally designed in hand painted oil on canvas format by Bollywood poster artist O.P. Bangali. Dramatic brush strokes are seen in the fiery background of this Raj Kapoor film poster. The artist depicts the showman in a rather sombre mood in a large close up portrait, with a smaller depiction of actress Nargis appearing alongside.

This Raj Kapoor Nargis poster is set against a fiery red background with eye catching typography used in the title.