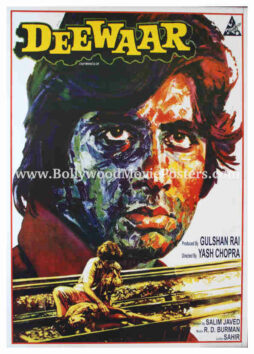 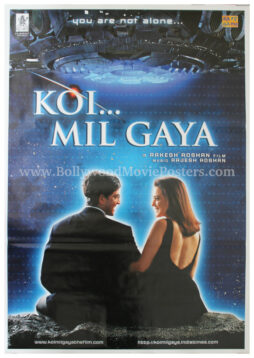 Deewaar poster for sale. Featured here is a reissue Bollywood poster of one of the greatest films ever made in Indian cinema, Deewaar (1975) for sale.

Deewaar is a 1975 action Hindi film directed by Yash Chopra that starred the biggest superstar of Indian cinema, Amitabh Bachchan in the lead role.

Printed in 2020, this reissue Deewaar movie poster features a stunning design. A large close up portrait of superstar Amitabh Bachchan (also known as The One-Man Industry) is seen dominating the poster. His face is over-painted with a knife using a colorful palette comprising a myriad of shades. The Angry Young Man of Bollywood’s persona has been captured with a rugged and macho texture in this Deewar poster.

The title appears in English in a large font at the top of this Deewar poster. An iconic scene from the film featuring actor Shashi Kapoor chasing down a young boy on the railway tracks is depicted at the bottom of this Deewaar poster for sale.