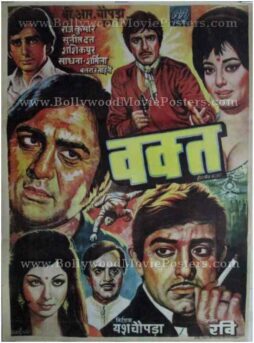 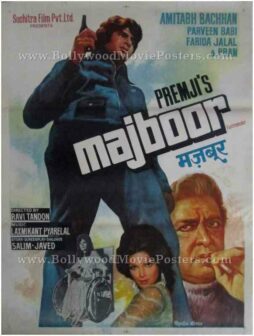 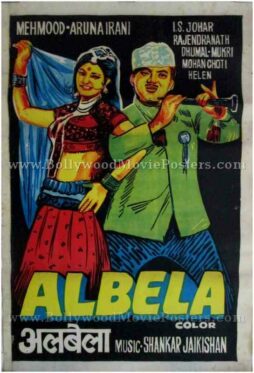 This is an actual surviving vintage Bollywood poster for sale of the 1965 Hindi film that was produced by B. R. Chopra and directed by Yash Chopra.

The film bagged several awards, most notable of them including the Filmfare Best Director Award (Yash Chopra) and the Filmfare Best Supporting Actor Award (Raaj Kumar). Waqt was shortlisted by the BFI in their list of films to consider for the top ten Indian films award, making this vintage Bollywood poster highly collectible!

This vintage Bollywood poster was designed and printed for publicity of the film a few years after its original first release (somewhere in the late 1960s).

This old Bollywood poster for sale was originally designed in hand painted oil on canvas format by a poster art studio in Delhi called Saraswati Arts. Stunning hand painted portraits of Shashi Kapoor, Raaj Kumar and Sadhana are seen on the top of this Waqt movie poster. A large close up of Sunil Dutt is seen in a brilliant hand painted rendition in the center. Smaller portraits of Sharmila Tagore and Balraj Sahni are seen below. A large close up of Raaj Kumar smoking a cigarette is seen on the bottom right hand corner of this Waqt movie poster.