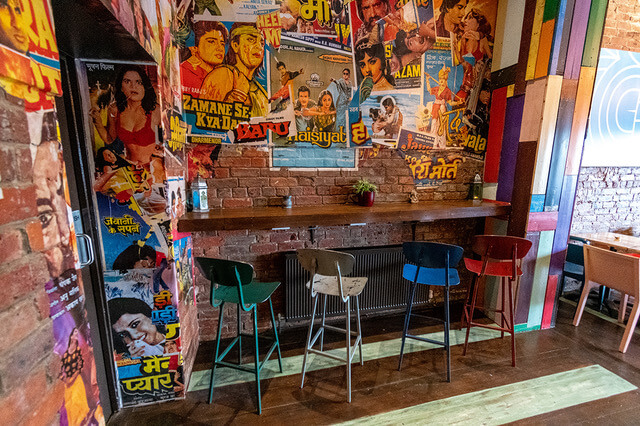 Typically, senior artists (either self-taught or art school graduates) would take on the challenging task of designing a hand painted Bollywood movie poster for the publicity of a film. These senior artists were generally art studio owners, with some of them employing dozens of talented artists in their team. After closely studying the project brief that was available to them – which could range from as little as a brief synopsis of the plot or as much as multiple still photos shot on the set location, these highly experienced Bollywood movie poster artists or Bollywood poster painters as they were known, would go about the task of designing an entire Bollywood movie poster completely by hand.

Starting with either a blank sheet of canvas or cloth which was specially prepared by adding a texture to the surface using crushed cattle bone, a pencil sketch or an outline was first created. Expert artistic brush strokes were then applied using a wide array of locally available powder colors dipped generously in linseed oil. Bright, almost fluorescent highlights were added to faces in order to illuminate them and put the stars under the spotlight in each hand painted Bollywood movie poster.

Often, dozens of different designs were hand painted by the Bollywood movie poster art studio or artist commissioned to design the poster. These designs, all hand painted art works on canvas, would then be reviewed by the production house or producer(s) of the Bollywood movie in question. After the production house had selected one or multiple hand painted designs (the latter was usually the case), the process of duplication would begin.

Duplication techniques of the past were just as primitive as the process used in hand painting Bollywood movie posters. Since there were no enlargement or reduction techniques available at the time, the canvas poster designs had to be exactly the same size as the size of the duplicated paper print required. Hence, more often than not, hand painted Bollywood movie posters were designed in single sheet or one sheet size (40”x30” inches approximately or a tad less than A0 size).

The advent of photographic movie posters

The advent of computers and digital design & printing techniques finally drew the curtains on this age old hand painted art form in the early 1990s.

Now, you can own this beautiful vintage art at a fair price available exclusively through the Bollywood Movie Posters (BMP) store.