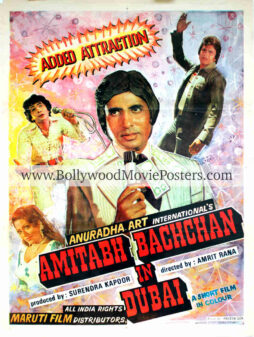 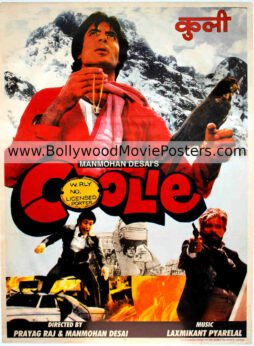 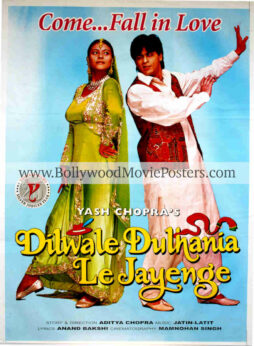 This is an actual surviving Amitabh Bachchan poster of the Hindi film that featured footage of the biggest superstar of Indian cinema performing live in Dubai.

Printed and circulated during the screening of the film in theaters (somewhere in the 1980s), this old Amitabh Bachchan in Dubai poster was originally designed for publicity of the film but never ended up being used.

This Amitabh Bachchan poster features the superstar in a large photographic still in the center. He is seen wearing a garland of hundred rupee notes and holding a microphone in his hand. Actors Rishi Kapoor and Mithun Chakraborty are seen in flamboyant poses on the top under a title that reads “Added Attraction.” Actress Aruna Irani is seen in a smaller still on the bottom left of this Amitabh Bachchan in Dubai poster.

Amitabh Bachchan holds the prestigious honor of being the first Indian who performed live at Madison Square Garden in New York, USA in 1983. The superstar performed at live concerts with music composer duo Kalyanji-Anandji across major cities in the US, Canada and West Indies.

These live events where Amitabh Bachchan sang songs from his films live and also danced to them, propelled the superstar to “Rockstar” status. The short film Amitabh Bachchan in Dubai chronicles his live stage show in the city.