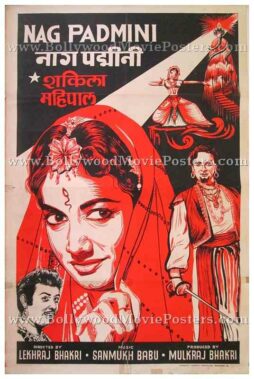 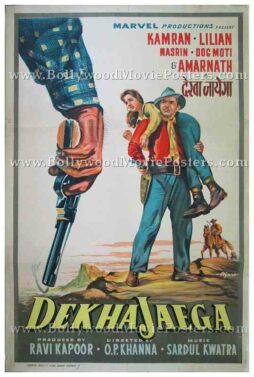 This is an actual surviving original vintage Bollywood movie poster of the 1976 Hindi film inspired from the Arabian folktale, “Ali Baba and the Forty Thieves.”

Printed and circulated during the first release run of the film (mid 1970s), this old hand painted Bollywood movie poster was originally designed for publicity of the film but never ended up being used.

This vintage Bollywood movie poster features a stunning combination of hand painted and photographic artwork. A large side profile portrait of the lead actress is hand painted on the center of the poster. Still photographs from two key battle scenes appear below – one in color and the other in black and white. The film credits the numerous junior artists who played a role in this war drama, with text on the top left that states, “With Thousand Others.”

This old Bollywood poster was originally designed in hand painted oil on canvas format by a leading art studio in Madras. A printed signature of the Bollywood poster artist, AS Murty is seen on the bottom right hand corner.