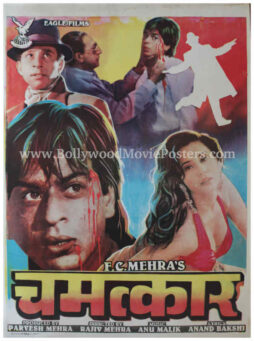 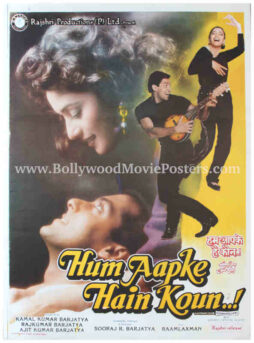 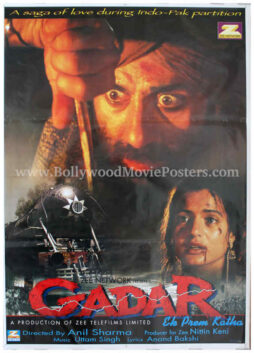 This is an actual surviving Shahrukh Khan movie poster of the 1992 Hindi movie that featured the “King of Bollywood” in his very first lead role.

Chamatkar was the second film that starred superstar Shahrukh Khan and the very first film that featured him in a lead role, making this SRK poster, highly collectible!

Printed and circulated somewhere in the early 1990s, this Shahrukh Khan poster was originally designed for publicity of the film but never ended up being used.

This old Bollywood poster features an interesting design technique. Superstar Shahrukh Khan is seen in a large close up still, with his face over painted. Highlights of blue, red and yellow have been added to his hair and dripping red blood to his face. Actress Urmila Matondkar appears in a sizzling photograph alongside.

Supporting actors Naseeruddin Shah and Tinnu Anand are seen on the top along with a smaller still of Shahrukh Khan in this Bollywood poster. The ghost Marco appears in a white silhouette on the top, giving away the theme of the film. The title of the film is seen in stunning two color font in Devanagari Hindi in this Shahrukh Khan movie poster.

Chamatkar is said to be inspired from the 1968 Hollywood film, Blackbeard’s Ghost. The film was remade in Telugu as Sahasa Puthrudu. The soundtrack of the film was composed by Anu Malik, and lyrics penned by Anand Bakshi. Tracks such as “Is Pyar Se Meri Taraf Na Dekho” sung by Kumar Sanu & Alka Yagnik are still fondly remembered and played today.