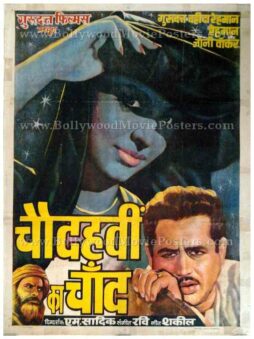 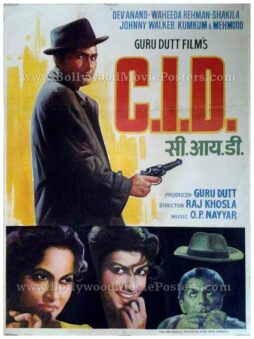 This is an actual surviving vintage Bollywood poster of the 1975 film directed by Hrishikesh Mukherjee that featured Dharmendra, Sharmila Tagore, Amitabh Bachchan and Jaya Bachchan in lead roles.

Printed and circulated somewhere during the first release of the film (Mid 1970s), this old vintage Bollywood movie poster was originally designed for publicity of the film but never ended up being used.

This Bollywood poster was originally designed on a hand painted canvas by one of the greatest Bollywood poster painters of all time, D.R. Bhosle, making it highly collectable. It features a very restrained and minimal design, which is typical of D.R. Bhosle’s artwork. The two leading couples are depicted in romantic poses at the top and bottom respectively. Typography appears completely in Devanagari Hindi.

Chupke Chupke (1975) is a hit Bollywood comedy directed by Hrishikesh Mukherjee starring Dharmendra, Sharmila Tagore, Amitabh Bachchan, Jaya Bachchan, Om Prakash, Asrani and Keshto Mukherjee. This film is one of two released in 1975 to cast Dharmendra and Amitabh together, the other being Sholay.