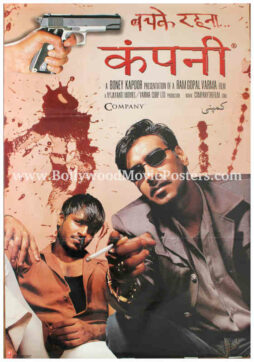 Printed and circulated during the initial first release of the film (somewhere in 2002), this classic Bollywood poster was designed for publicity of the film but never ended up being used.

Ajay Devgn’s portrayal of the character “Malik” and Vivek Oberoi as “Chandu” won the praise of critics and fans alike.

Danny Boyle cited Company and Satya as inspirations for his Academy Award winning film Slumdog Millionaire (2008). Company is regarded by many as one of Ram Gopal Varma’s finest, making this Ajay Devgn poster highly collectible!

The star is seen smoking a cigarette in a stunning photograph prominently in this Ajay Devgan movie poster. Debutant Vivek Oberoi is seen in the background. A hand holding a pistol is seen on the top of this Bollywood poster for sale. A blood splattered wall is seen in the background. The words “Bachke Rehna (Stay Away)” along with the title of the film in Devanagari Hindi type are seen written in blood on the top of this Ajay Devgan film poster.

Company is the second film in the Indian Gangster trilogy and a sequel to Satya (1998). The story of the film is inspired from the fallout between mobster turned terrorist Dawood Ibrahim and his aide Chhota Rajan, which caused a rift in his gang (the D-Company).