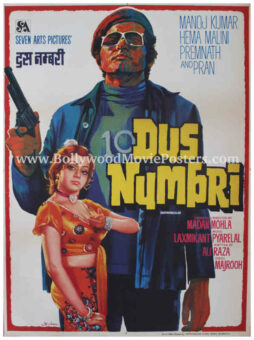 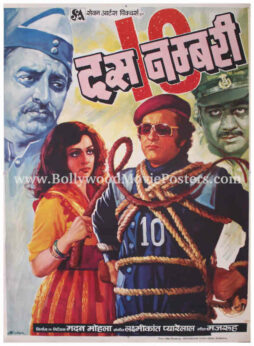 Printed and circulated during the first release of the film (somewhere in 1976), this old Bollywood movie poster was originally designed for publicity of the film but never ended up being used.

Produced and directed by Madan Mohla, Dus Numbri featured one of the finest performances of actor Manoj Kumar, who is known popularly by the moniker “Bharat Kumar.” Dus Numbri was the biggest hit of the year 1976 and is counted among the top films of the 1970s, making this original Bollywood movie poster highly collectible!

This vintage Bollywood movie poster features stunning hand painted artwork created by one of the highest paid and most sought after Bollywood poster designers of his time, Diwakar Karkare of Studio Diwakar fame. A large hand painted portrait of actor Manoj Kumar (who plays a local vigilante in the film) is seen prominently in the poster. His face is seen hand painted with broad brush strokes, giving him a very macho and rugged appearance. He is seen holding a gun, wearing his trademark dark coloured glasses and a t-shirt with the number 10 written on it. Actress Hema Malini is seen in a dancing pose in a smaller hand painted avatar at the bottom of this original Bollywood movie poster.

The entire typography used in this vintage Bollywood poster is in English. The title of the film is seen hand painted in striking yellow. A signature of poster artist Diwakar Karkare is printed on the bottom left of this old Bollywood poster. The entire poster is set against a minimal white background with a pin stripe border, giving it an extremely eye catching appeal.