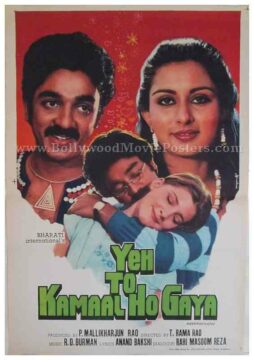 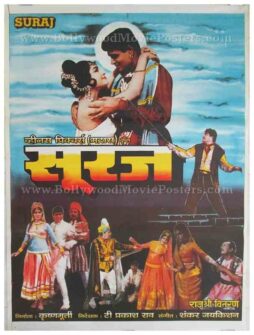 This is an actual surviving publicity poster of the 1988 film that featured the greatest superstar of Bollywood, Amitabh Bachchan in the lead role.

Printed and circulated a few years after the first release of the film (somewhere in the early 1990s), this vintage movie poster was printed for publicity of the film but never ended up being used.

This poster was originally designed by cutting out images of actors from separate still photographs (shot on set location) and pasting them on a board. The background and typography are hand drawn / hand painted, which makes this old Bollywood poster an interesting mix of two very different design techniques.

Ganga Jamuna Saraswati is 1988 Bollywood film directed by Manmohan Desai and starring superstar Amitabh Bachchan in the lead role as Ganga. Despite its impressive star cast which included other popular actors such as Meenakshi Sheshadri, Jaya Prada, Mithun Chakraborty, Amrish Puri and Nirupa Roy, the film failed to make a splash at the box office and was declared a flop.