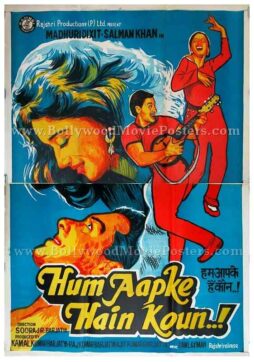 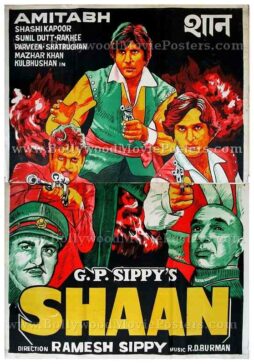 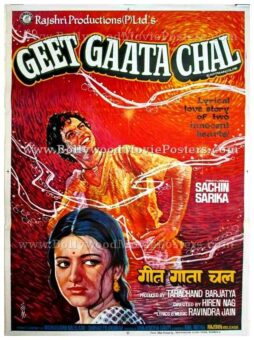 Very rare hand painted movie poster of one of the biggest blockbusters in Bollywood, Hum Aapke Hain Koun..! (1994) for sale.

This is an actual surviving large two sheet Bollywood poster of the epic 1994 Hindi film which featured superstars Salman Khan and Madhuri Dixit in lead roles.

Hum Aapke Hain Koun was released in 1994, at a time when the entire Bollywood movie poster design industry had shifted from hand painted art to computer aided graphic design. As such, movie posters designed for publicity of the film were all photographic.

It is the only hand painted Bollywood movie poster of the film Hum Aapke Hain Koun known to exist, making it highly collectible.

Printed and circulated a few years after the first release of the film (somewhere in the late 1990s), this old hand drawn Hindi cinema two sheet poster was designed for publicity of the film but never ended up being used.

In this vintage Bollywood movie poster, the lead romantic couple, Salman Khan and Madhuri Dixit are seen locked in a gaze in a quirky hand painted rendition on the left hand side of the poster. An iconic dancing pose of the two in silhouette form appears alongside, inspired from a memorable song from the film. This quirky Salman Khan movie poster is set against a blue background. The title of the film appears in both English as well as Devanagari Hindi.