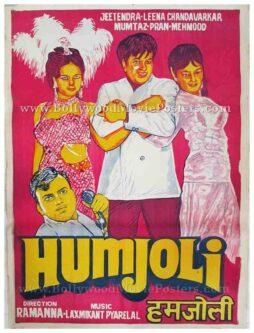 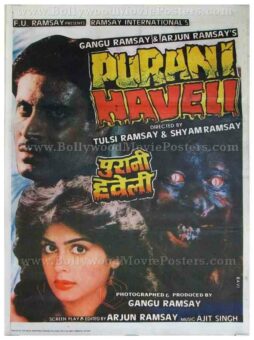 This is an actual surviving vintage publicity poster of the 1970 Bollywood movie that starred Jeetendra, Leena Chandavarkar, Mehmood and Mumtaz in key roles.

Printed and circulated a few years after the first release of the film (somewhere in the late 1970s), this old Bollywood movie poster was originally designed for publicity of the film but never ended up being used.

The poster features an interesting quirky design in which lead actor Jeetendra is seen flanked by the two leading ladies of the film on the top. Actress Mumtaz who plays the role of a cabaret dancer is seen on the left of this hand painted Bollywood poster.

Humjoli is a 1970 Bollywood movie starring the “Jumping Jack” of Bollywood, Jeetendra in the lead role. Supporting cast of the film included Leena Chandavarkar, Pran, Mehmood, Mumtaz and Aruna Irani. Music for the film was composed by Laxmikant Pyarelal.