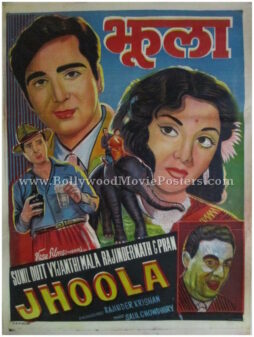 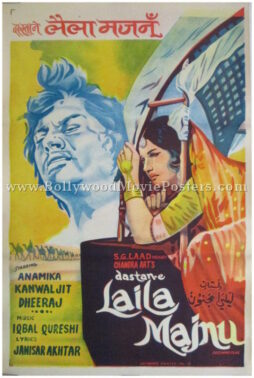 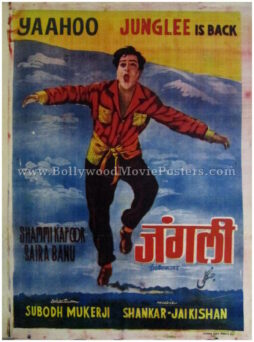 Jhoola was the second collaboration of Vyjayanthimala and Sunil Dutt after the stellar success of Sadhna (1958).

Printed and circulated a few years after the initial first release of the film (somewhere in the 1960s), this vintage Bollywood poster was originally designed for publicity of the film but never ended up being used.

This vintage Bollywood poster was designed by an art studio in Delhi and has a quirky hand painted appearance which is typical of old school Bollywood posters. Large hand drawn portraits of Vyjayanthimala and Sunil Dutt are seen prominently in this vintage Bollywood Delhi poster. A couple riding an elephant are seen in the center. A smaller hand drawn figure of actor Pran holding a whiskey bottle in one hand and a glass in the other is seen on the left hand side of this old Hindi movie poster designed in Delhi. Comedian Rajendra Nath is seen in a hilarious drawing at the bottom.