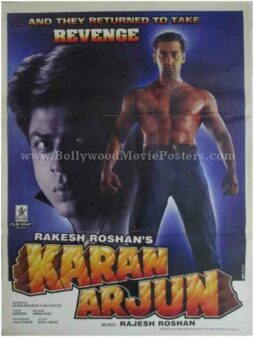 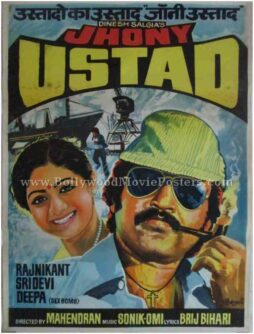 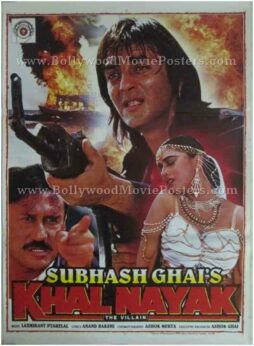 This is an actual surviving old Bollywood poster of the 1995 classic Hindi film that featured two of the biggest superstars of Bollywood Shahrukh Khan and Salman Khan together on screen.

Karan Arjun was the second biggest hit of 1995 after Dilwale Dulhania Le Jayenge and starred the King Khans of Bollywood together, making this classic Bollywood poster highly collectible!

Printed and circulated during the initial first release of the film (somewhere in the mid 1990s), this Karan Arjun movie poster was originally designed for publicity of the film but never ended up being used.

Karan Arjun was directed by Rakesh Roshan and featured Raakhee, Amrish Puri, Kajol, Mamta Kulkarni and Johny Lever in prominent roles in addition to the two King Khans who played the lead roles in the film. Actor Hrithik Roshan was the assistant director of Karan Arjun – his first major contribution to Bollywood.

The music and background score was composed by Rajesh Roshan. Songs from the film such as “Jaati Hoon Mein Jaldi Hai Kya” and “Yeh Bandhan to Pyar Ka Bandhan Hai” became instant hits and are still played today.