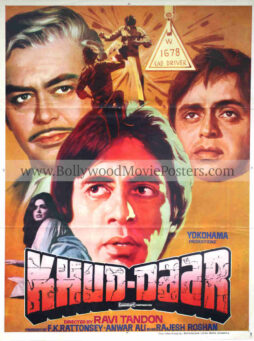 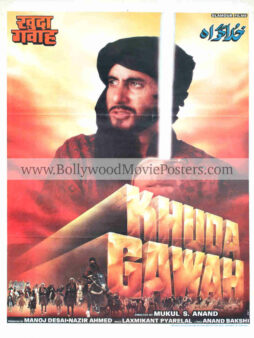 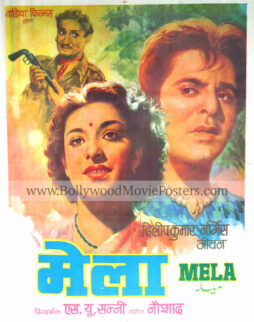 This is an actual surviving original Bollywood poster of the hit Hindi film Khud-Daar (1982).

Printed and circulated during the screening of the film in theaters (somewhere in the early 1980s), this Khuddar poster was originally designed for publicity of the film but never ended up being used.

The exact release date of Khud-Daar however worked to it’s advantage. The film was released during the month when Amitabh was hospitalized after a critical accident on the sets of Coolie. As such, the film ran to packed houses and became one of the highest grossing movies of 1982.

This Amitabh Bachchan film poster features the superstar in a stunning hand painted portrait at the bottom. He is seen again in a smaller hand painted rendition on the top, kicking a villain. Hand painted faces of actors Sanjeev Kumar and Vinod Mehra are seen alongside on the top of this Amitabh Bachchan film poster. Actress Parveen Babi is seen in a photographic still at the bottom left of this Khuddar poster. A taxi driver badge that has the number 1678 is seen dangling from the top center of this vintage Bollywood poster.

The soundtrack album of Khud-Daar was composed by Rajesh Roshan and lyrics were penned by Majrooh Sultanpuri. It was a stellar success at the time of the film’s release. Songs from the film such as “Disco 82” and “Angrezi Mein Kehte Hain Ki I Love You” sung by Kishore Kumar and Lata Mangeshkar became a rage throughout the nation and are fondly remembered and played till date.

Khud-Daar was remade in Tamil as Padikkadhavan and in Telugu as Driver Babu.