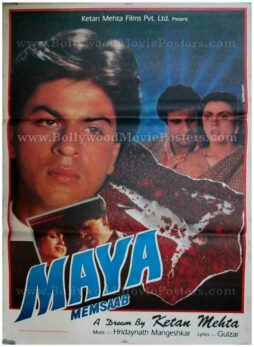 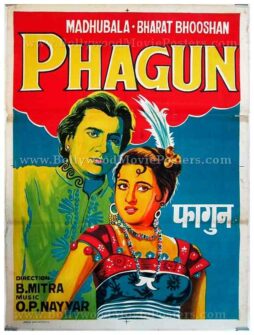 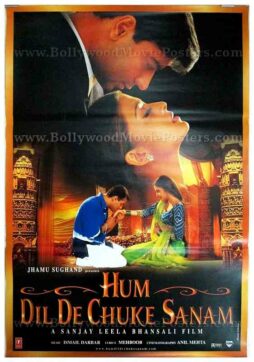 This is an actual surviving vintage poster of the 1993 film that featured superstar Shahrukh Khan in the lead role opposite actress Deepa Sahi.

Maya Memsaab is remembered till date for a controversial nude scene that featured Shahrukh Khan and Deepa Sahi, making this poster highly collectible!

Printed and circulated during the first release of the film, this classic Indian movie poster was originally designed for publicity of the film but never ended up being used.

This old Bollywood poster was originally designed by cutting out images of actors from separate still photographs (shot on set location) and pasting them on a board. The background and typography are hand drawn / hand painted, which makes this poster an interesting mix of two very different design techniques.

In the poster, superstar Shahrukh Khan is seen in a large cut out still photo, while actress Deepa Sahi appears lying on a bed covered with rose petals on his side. A snippet from a passionate scene involving Shahrukh Khan and Deepa Sahi is seen pasted at the bottom. Raj Babbar and Deepa Sahi are seen on the right hand side of the poster in another still photograph from the film. The typography used in this vintage Bollywood poster is entirely in English.

Maya Memsaab ran into trouble at the time of its release, owing largely to a controversial nude scene featuring Deepa Sahi and Shahrukh Khan.

The film marks one of Shahrukh Khan's first significant appearances, who started his Bollywood career just a year earlier, in 1992.