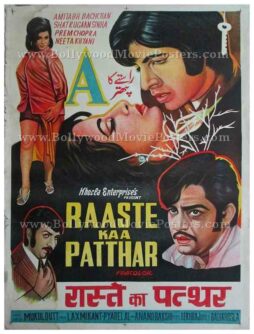 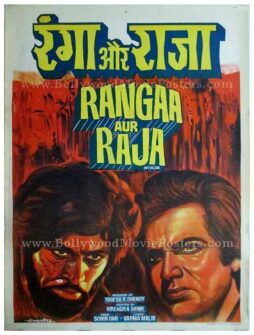 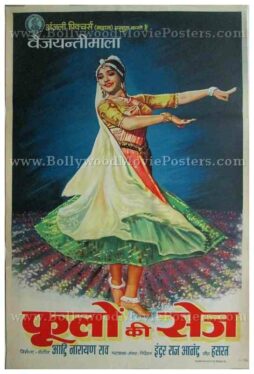 This is an actual surviving old Bollywood poster of the 1972 Hindi film that starred the biggest superstar of Indian cinema, Amitabh Bachchan in the lead role.

Printed and circulated a few years after the first release run of the film (1970s), this vintage Bollywood movie poster was designed and printed for publicity of the film but never ended up being used.

This poster was originally designed in hand painted oil on canvas format by a small time poster design studio, giving it a very quirky appearance.

The letter A appears prominently on the poster, signifying the Adult rating under which the film was released in theaters. Superstar Amitabh Bachchan is seen in a romantic pose on the top. Quirky hand painted portraits of Shatrughan Sinha and Prem Chopra are seen at the bottom. A single room key is seen dangling on the top right hand corner of the poster, giving a subtle hint into the plot of the film.

Raaste Kaa Patthar is a 1972 Bollywood action film directed by Mukul Dutt. The film stars Amitabh Bachchan and Shatrughan Sinha in lead roles. The film’s storyline is modeled closely along the lines of the Hollywood hit, “The Apartment.”