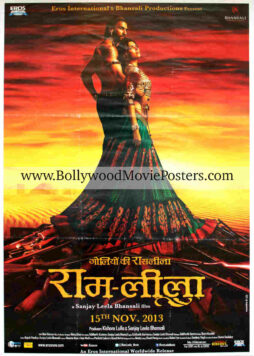 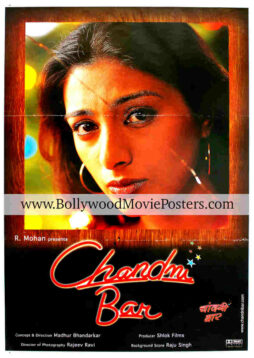 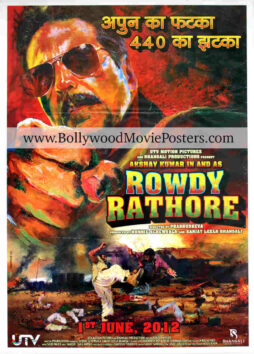 Printed and circulated during the debut release of the film in theaters (somewhere in 2013), this glossy Deepika Padukone poster was originally designed for publicity of the film but never ended up being used.

A stunning still photograph of the lead couple Ranveer Singh and Deepika Padukone is seen prominently on this Ram Leela movie poster. Ranveer Singh appears shirtless, embracing Deepika Padukone from behind. The background shows a sunset, with a stunning mix of yellow, orange and red hues. Deepika is seen wearing a stunning green bridal lehenga in this Ranveer Singh poster. The two appear to be standing over dozens of rifles, suggesting the action theme of the film.

The title of the film is seen in Devanagari Hindi at the bottom, with the rest of the text appearing in English.

The soundtrack album of the film was composed by Sanjay Leela Bhansali and it became a rage throughout the nation at the time of the films release. Songs like “Tattad Tattad” sung by Aditya Narayan, “Ram Chahe Leela” sung by Bhoomi Trivedi and “Lahu Munh Lag Gaya” are fondly remembered and played till today.