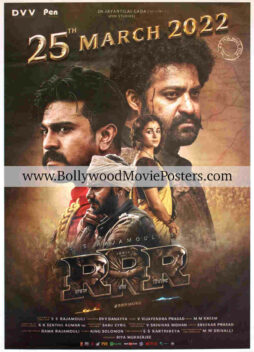 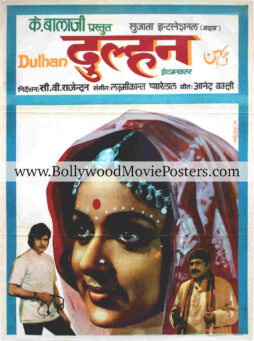 Printed and circulated during the debut of the film in theaters (somewhere in 2022), this RRR poster was designed for publicity of the film but never ended up being used.

A period film set in the 1920s, RRR was made on a budget of Rs. 550 crore (approximately $72 million USD), making it the most expensive Indian film ever made. The film broke all box office records, most notably the highest opening day earnings by an Indian film, becoming the third highest grossing Indian film and the second highest grossing Telugu film worldwide.

RRR won several accolades, becoming the third Indian film and the first Telugu film to receive nominations at the Golden Globes, including Best Foreign Language Film. The film was considered one of the ten best films of the year by the National Board of Review, making this RRR movie poster, highly collectible!

Lead actors N.T. Rama Rao Jr. and Ram Charan are seen in stunning side profile close ups on the top of this RRR poster. Actress Alia Bhatt appears in a smaller full length photo below. A side profile of actor Ajay Devgn is seen on the bottom of this RRR movie poster.

The title of the poster appears in English at the bottom, with an explanation of the three Rs encased inside as: “Rise, Roar, Revolt.” Side profile photos of the two lead stars N.T. Rama Rao Jr. and Ram Charan are seen encased beautifully inside the 3D logo of this RRR poster.