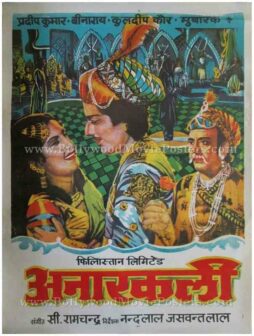 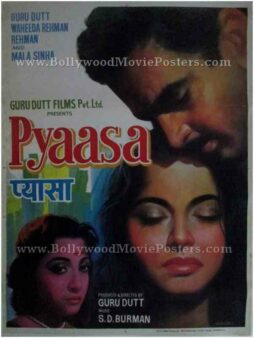 This is an actual surviving vintage Bollywood poster of the 1962 award winning Hindi film that was produced by one of the most influential filmmakers in Indian cinema, Guru Dutt. Sahib Bibi Aur Ghulam featured Guru Dutt in the lead role along with Meena Kumari.

This is an extremely rare Bollywood movie poster that depicts Meena Kumari lying in a drunken stupor, at a time when women drinking alcohol was regarded as a taboo in Indian culture, making this poster highly collectible.

Sahib Bibi Aur Ghulam was a stellar success and Meena Kumari’s performance as an alcoholic lonely wife is considered one of the finest performances in Indian cinema till date. The film features in many top ranking lists that have been compiled over the years and is unanimously regarded as a must see film in Bollywood.

Printed and circulated somewhere in the late 1960s, this old Bollywood poster was originally designed for publicity of the film but never ended up being used.

Sahib Bibi Aur Ghulam is a 1962 Bollywood movie produced by master filmmaker Guru Dutt. The film stars Guru Dutt, Meena Kumari, Waheeda Rehman and Rehman. Sahib Bibi Aur Ghulam is based on a Bengali novel, Shaheb Bibi Golam by Bimal Mitra. The novel (and the film) tells a story about the complicated triangle of relationships between a lonely wife, her wealthy husband and their servant.