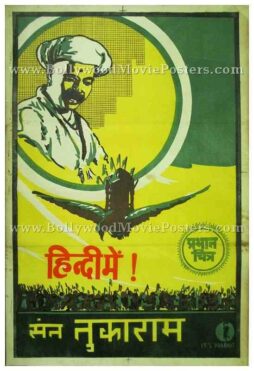 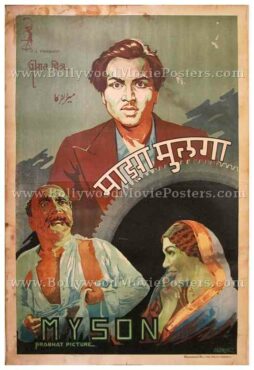 This is an actual surviving original old Marathi movie poster of the 1940 film which was produced by Prabhat Film Company and directed by Vishnupant Govind Damle.

Printed and circulated during the first release run of the film (early 1940s), this old Marathi movie poster was originally designed for publicity of the film but never ended up being used.

In this old Marathi movie poster, lead actor Shahu Modak is seen in a black and white photographic still at the center. A yellow halo is painted around his head to give him a godly, saint-like appearance. The still photo is set against a blue background and the film’s title appears prominently at the bottom in yellow typeset. The iconic Prabhat Film Company logo is seen on the top left corner that reads, “It’s Prabhat.”