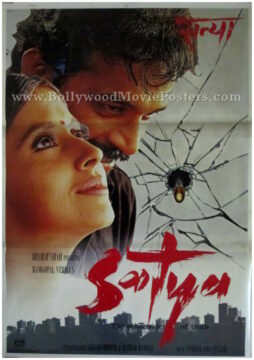 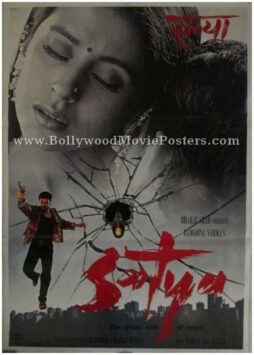 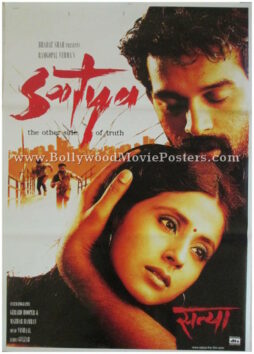 This is an actual surviving classic Bollywood movie poster of the 1998 crime drama Satya that was written by Saurabh Shukla and Anurag Kashyap.

The film has amassed a cult following over the years, with many critics heralding it as one of the finest gangster films ever made in Indian cinema, making this Satya movie poster highly collectible.

Printed and circulated during the original first release run of the film (late 1990s), this glossy Satya movie poster was originally designed and printed for publicity of the film but never ended up being used.

The lead couple J. D. Chakravarthy and Urmila Matondkar are seen in a romantic pose in this Satya movie poster. A bullet is seen shattering through glass prominently in the poster. The cityscape of Mumbai is seen in a silhouette at the bottom of this Satya movie poster. The title of the movie appears written in a bloodstained font with a message at the bottom that reads, “The other side of truth.”