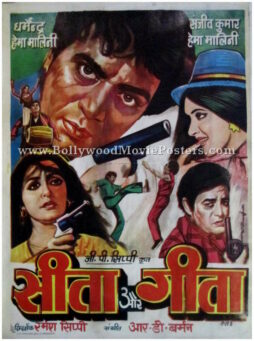 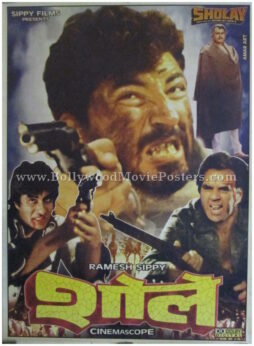 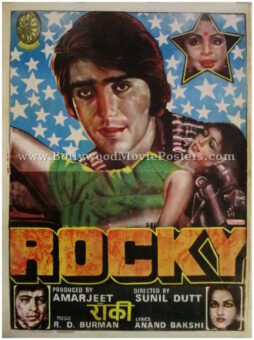 This is an actual surviving publicity poster of the 1972 film that featured the Dream Girl of Indian cinema, Hema Malini in an unforgettable double role. Dharmendra and Sanjeev Kumar also starred in this 1972 Bollywood comedy that was directed by Ramesh Sippy.

Printed and circulated subsequent to the first release of the film (somewhere in the late 1970s), this old Hindi movie poster was originally designed for publicity of the film for a local release run in Delhi but never ended up being used.

This quirky hand drawn Bollywood poster features a large closeup of Dharmendra holding a pistol in his hand. Dream Girl Hema Malini appears twice in this vintage Bollywood poster in two different avatars to depict the double role plot of the film. Actor Sanjeev Kumar is seen in a smaller rendition at the bottom of this Seeta Aur Geeta poster.

Delhi Bollywood poster painter Amar’s signature is seen on the right hand corner of this vintage Bollywood poster. The action sequences captured in smaller stick figures in the background and the pistol wielding actors in the foreground are typical of hand drawn Bollywood posters in Delhi.

Seeta aur Geeta tells the story of identical twins separated at birth. The film was written by Salim-Javed and it’s music composed by R.D. Burman.