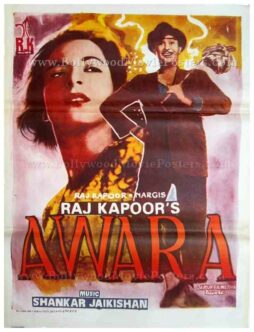 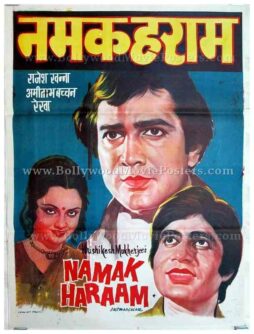 Teesri Manzil is a 1966 musical thriller, starring the “Elvis Presley of India” Shammi Kapoor in the lead role opposite Asha Parekh. The film has become a timeless classic due to its fabulous music composed by one of the greatest composers in Bollywood, RD Burman.

This is an actual surviving vintage Bollywood poster of the 1966 film, printed and circulated somewhere in the 1970s. This quirky, hand drawn vintage movie poster was originally designed for publicity of the film but never ended up being used.

The poster features a hand drawn portrait of lead actor Shammi Kapoor in an Elvis like rock star avatar (accentuated with highlight streaks around him), performing on stage with fans reaching out to him from the audience. Typography used in the poster is a combination of Devanagari Hindi on the top and English on the bottom.

This poster has been graded ★ As Is due to the stain seen on the left side of the poster. The overall condition of the paper is fair and there is minor taping / repair carried out on the reverse.

Teesri Manzil (Third Floor) is a 1966 Bollywood thriller starring the “Elvis Presley of India” Shammi Kapoor. Actress Asha Parekh plays the love interest of Shammi Kapoor in this film. In Teesri Manzil, Shammi is seen in his element, in a rock star avatar. During one of his musical performances, he sees a young woman from the third floor of the hotel, which is where the story unfolds into a murder mystery and lends its name to the film.