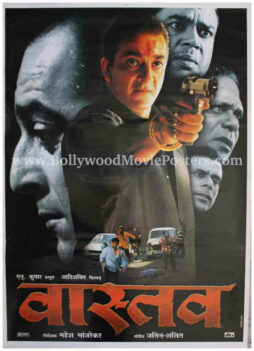 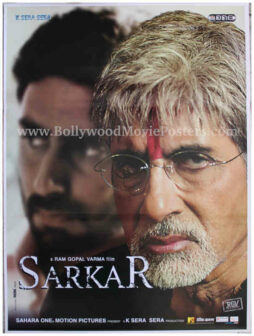 The film’s tagline, “The Reality,” is a representation of the harsh reality of life in the Mumbai underworld.

Sanjay Dutt won the Filmfare best actor award for his role as “Raghu” in Vaastav, which is widely regarded by critics as one of Indian cinema’s most memorable onscreen characters. Vaastav has amassed a cult following over the years, with the film’s dialogues becoming part of social culture, making this Sanjay Dutt film poster highly collectible!

Printed and circulated prior to the original release of the film (somewhere in the year 1999), this Sanjay Dutt Vaastav poster was originally designed for publicity of the film but never ended up being used.

Superstar Sanjay Dutt appears in his gangster avatar taking aim with a pistol at the center. He is seen wearing his iconic “50 tolas” of gold in this Vaastav movie poster. A large side profile of the superstar is seen in black and white on the left of this Sanjay Dutt film poster. Smaller close up pictures of Paresh Rawal, Shivaji Satam and Ashish Vidyarthi are seen in the background. A still from the film featuring a shootout between two rival gangs is seen below. The title of the film is seen in Devanagari Hindi in a bright red font at the bottom of this Sanjay Dutt Vaastav poster.

Vaastav is considered superstar Sanjay Dutt’s finest film performance till date and his iconic dialogues from the film such as “50 tola” are fondly remembered and quoted till today.