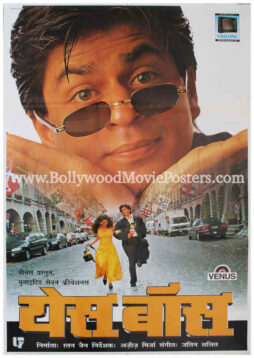 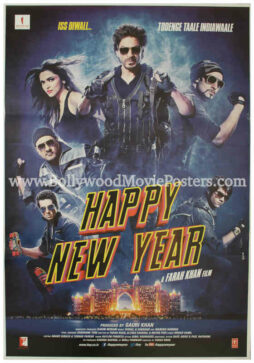 This is an actual surviving Shahrukh Khan poster of the super hit Hindi film Yes Boss (1997) that featured the “King of Bollywood” along with Juhi Chawla in pivotal roles. Aditya Pancholi played a supporting role in the film.

Directed by Aziz Mirza, Yes Boss is believed to be inspired by the Hollywood film For Love Or Money (1993), which starred Michael J Fox.

Printed and circulated during the first release of the film, this SRK poster was originally designed for publicity of the film but never ended up being used.

Superstar Shahrukh Khan is seen a stunning close up on the top of this Yes Boss poster. Dark eyeglasses are seen on his nose. A smaller still photograph featuring the lead couple Shah Rukh Khan and Juhi Chawla running on a street is seen below. Typography used in this Shah Rukh Khan poster is entirely in Devanagari Hindi.

Yes Boss is a 1997 Indian romcom that featured an award winning soundtrack. The album’s six songs were composed by Jatin-Lalit with lyrics penned by Javed Akhtar. Yes Boss catapulted singer Abhijeet Bhattacharya to superstardom, winning him his first Filmfare Award for Best Male Playback Singer for the song “Main Koi Aisa Geet Gaoon”. His other tracks from the film, “Chaand Taare,” “Suniye To” and “Jaata Hai Tu Kahan” are also fondly remembered and played till today.