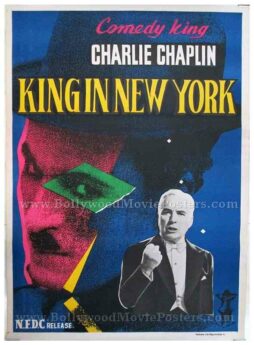 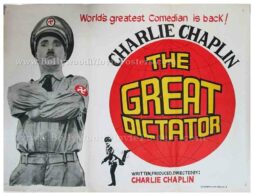 This is an actual surviving poster of Limelight, which was released in India by the National Film Development Corporation of India (NFDC).

Limelight is the only film for which Charlie Chaplin received an Academy Award (the rest being honorary awards), making this poster highly collectible.

The poster features a black and white still photograph of Charlie Chaplin from the film at its center. It capitalizes on the film’s Academy Award for best original music score. The poster mentions Chaplin with his original first name “Charles.”

Limelight is a 1952 comedy written, directed by and starring Charlie Chaplin. The film’s musical score was composed by Chaplin and arranged by Ray Rasch.

The film was released amidst great scandal. While touring for the film, Chaplin was refused reentry into the United States. The film was subsequently passed over by many theaters. In 1972, the film was given a wide U.S. release and honored at the Academy Awards.

Chaplin is reported to have told his older sons that he expected Limelight to be his last film. Limelight was made during a time where Chaplin was starting to lose his audience, and the fading success of his real life was mirrored by his character in the film. Hence, many believe Limelight to be somewhat autobiographical.

While touring Britain to promote the film Chaplin learned that he had been refused a reentry visa to the United States because of his alleged communist sympathies, and many American theaters refused to play Limelight. It was not until 1972 that the film was finally seen in wide American release, and Chaplin, Larry Russell, and Ray Rasch received the Oscar for best original score.

The film was massively popular in Japan, Europe and around the world. In the US, however, it was a relative disappointment, only taking in $1 million.

In 1972, twenty years after the film’s first release, Chaplin and his musical collaborators Raymond Rasch and Larry Russell were awarded an Oscar for Best Original Dramatic Score. It was the only competitive Academy Award Chaplin ever received (He had previously received two Honorary Oscars.)