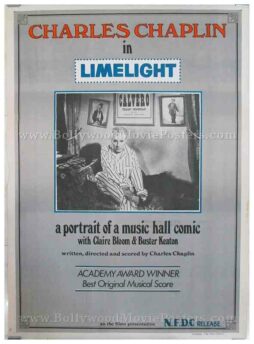 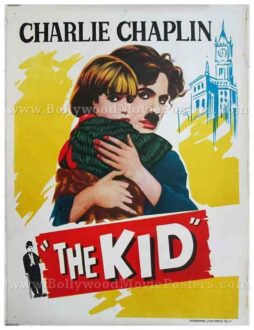 Stunning original old movie poster of the greatest Charlie Chaplin classic ever made, The Great Dictator (1940) for sale.

This is an actual surviving poster of The Great Dictator, which was released in India by the National Film Development Corporation of India (NFDC).

The Great Dictator is Charlie Chaplin’s first complete sound film (talkies) as well as his most commercially successful film ever, making this poster highly collectible.

This brilliantly designed poster features a large still photograph of Charlie Chaplin dressed as Hitler. A small black and white silhouette of his character is seen pasted at the bottom. The poster introduces Charlie Chaplin as “The world’s greatest comedian is back!” on the top. The typography on the film’s title gives an almost 3D like effect.

The Great Dictator (1940), like many of Charlie Chaplin’s other films, is a comedy written, produced, scored and directed by him, starring him in the lead role.

Charlie Chaplin is the only Hollywood filmmaker to continue to make silent films well into the sound era. The Great Dictator, however was Charlie Chaplin’s first true talking picture as well as his most commercially successful film.

The Great Dictator was a satirical and very controversial take on Adolf Hitler & Benito Mussolini’s fascism and antisemitism. In the film, Charlie Chaplin reportedly mocks Nazis as being “machine men, with machine minds and machine hearts”. Several years after the film’s release, in his 1964 autobiography, Charlie Chaplin is known to have admitted that he would not have made the film had he known about the horrors of the Nazi concentration camps.

The film was well received at the time of its release and was popular with the American as well as British public. The film had been banned in many parts of Europe for obvious reasons.

The Great Dictator eventually became Charlie Chaplin’s highest grossing film with a total of 11 million worldwide. The film was nominated for five Academy Awards. In 1997, The Great Dictator was selected for preservation in the United States National Film Registry by the Library of Congress.