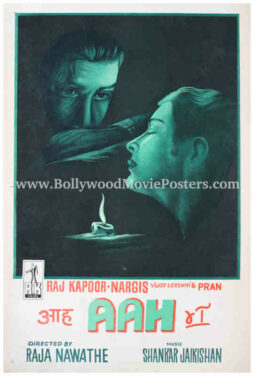 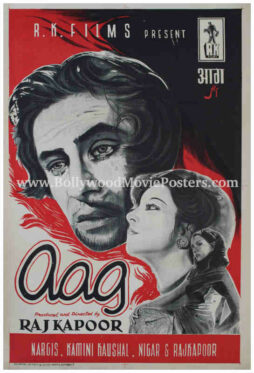 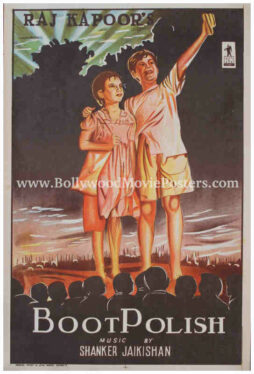 Raj Kapoor poster of the black and white Hindi film Aah (1953) for sale.

This is an actual surviving original Bollywood movie poster of the 1953 romantic drama which featured the greatest entertainer of all time in Bollywood, Raj Kapoor (also known as The Show Man of Indian cinema). As was the trend in Raj Kapoor films, Nargis played his love interest.

Aah was produced by Raj Kapoor and directed by Raja Nawathe. This was Nawathe’s first independent directorial venture after working as assistant director to Raj Kapoor in Aag (1948), Barsaat (1949) and Awaara (1951).

This old Raj Kapoor poster was printed and circulated a few years after the debut of the film in theaters (somewhere in the late 1950s) and was intended for publicity of the film but never ended up being used.

This old Bollywood poster was originally made in hand painted oil on canvas format by a leading poster art studio in Bombay. A green shade (with a gradient of light and dark tones) has been used to paint this vintage Bollywood poster. The lead couple Raj Kapoor and Nargis appear in a stunning portrait set against a dark background. A candlelight in between the two adds to the romantic appeal of this old Raj Kapoor Nargis poster.

The typography used in this poster is seen in English at the bottom, with a translation in Devanagari Hindi and in Urdu on either side. The iconic RK logo is seen at the bottom of this very rare Raj Kapoor poster.

The soundtrack album of Aah composed by Shankar-Jaikishan and written by Hasrat Jaipuri became very popular at the time of the film’s release. One of the songs from the film, “Raja Ki Aayegi Baraat” sung by Lata Mangeshkar is fondly remembered and played till today.

Singer Mukesh played a cameo role in Aah, appearing in one of the songs he sung, “Chhoti Si Yeh Zindagani.” Aah was later dubbed in Tamil as “Avan” and in Telugu as “Prema Lekhalu.” Prema Lekhalu was so well received that Raj Kapoor asked music composers Shankar-Jaikishan to include the phrase “Ramaiya Vastavaiya” (Lord Ram will you not come?) in his blockbuster song in the soundtrack of Shree 420. Aah was also remade in Turkish as “Ah Bu Dünya” (1965) starring Cüneyt Arkın.

Aah was a tragic love story, believed to be inspired from Sarat Chandra Chattopadhyay’s epic novel Devdas. The film failed to do well in it’s first release, which prompted Raj Kapoor to change the climax from a tragic ending to a happy one to win audience appreciation.