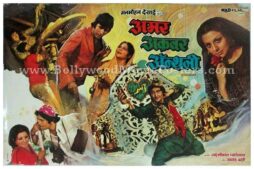 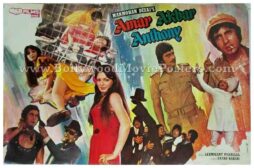 This is an actual surviving vintage Bollywood movie poster of the 1977 film that featured the greatest superstar of Indian cinema Amitabh Bachchan in the lead role along with Rishi Kapoor and Vinod Khanna.

Printed and circulated a few years after the original first release run of the film (somewhere in the late 1970s / early 1980s), this old Amitabh movie poster was originally designed for publicity of the film but never ended up being used. This Amar Akbar Anthony film poster was originally intended to be used as a showcard inside cinema halls but never ended up being mounted on boards.

This old Bollywood poster was originally designed on a collage board by the greatest and most expensive Bollywood poster artist of all time, Diwakar Karkare, owner of Studio Diwakar. His printed signature is seen on the bottom left of the poster. This Amar Akbar Anthony film poster features still photos of several key scenes from the film. A large photographic still from the hit song, “Parda Hai Parda” is seen prominently at the center of the poster.

This old Bollywood poster has been graded as ★ As Is due to several missing pieces along its borders. Please purchase only if you are okay with owning a damaged poster.