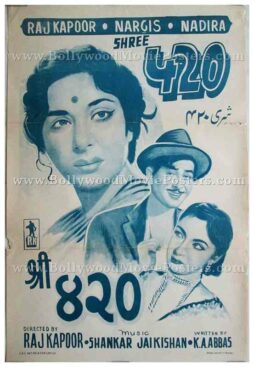 Printed and circulated somewhere during the original first release run of the film (somewhere in the 1970s), this Amitabh Bachchan old movie poster was originally designed for publicity of the film but never ended up being used.

This hand painted Bollywood poster was originally designed on canvas by the greatest and most expensive Bollywood poster artist of all time, Diwakar Karkare, owner of Studio Diwakar. His printed signature is seen in white on the bottom left of the poster. This Amar Akbar Anthony film poster is a striking example of Diwakar Karkare’s mastery. Flawlessly executed, this hand painted Bollywood poster features a total of thirteen highly accurate portraits – all displaying amazing synergy and coherence with the overall design.

Superstar Amitabh Bachchan is seen in a superb hand painted rendition on the bottom, smoking a cigarette. Another striking portrait of Rishi Kapoor presumably in a dancing pose from the iconic song, “Parda Hai Parda” is seen on the right of the poster.

This vintage Bollywood poster has been professionally restored by an expert paper archivist. It has been backed on cotton using a thorough acid-free conservation and restoration process. Minor paper loss has been adequately filled which make no noticeable difference to the display quality of the poster when seen from a viewing distance.