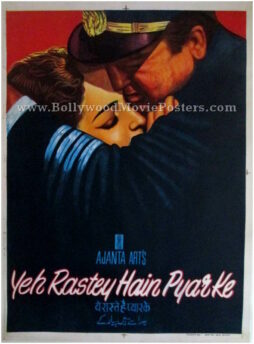 This is an actual surviving vintage Bollywood poster of the 1972 Hindi film directed by Shakti Samanta starring Sharmila Tagore and Rajesh Khanna in lead roles.

After delivering two back to back hits – Aradhana (1969) and Kati Patang (1971) – Shakti Samanta achieved a hat trick of hits with Amar Prem’s release in 1972. The film became his third consecutive blockbuster to star Bollywood’s original superstar, Rajesh Khanna.

Rajesh Khanna’s epic dialogue, “Pushpa, I hate tears,” which appeared five times in the film, went on to become one of the most memorable dialogues of Indian cinema and has been parodied several times over the years.

Printed and circulated during the debut release of the film (early 1970s), this old Bollywood poster was originally designed for publicity of the film but never ended up being used.

The poster features a stunning hand painted portrait of the lead couple in a passionate pose. A plain green background with a yellow border further highlights the minimalism in the design of this original Bollywood movie poster.