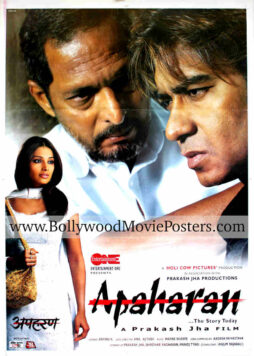 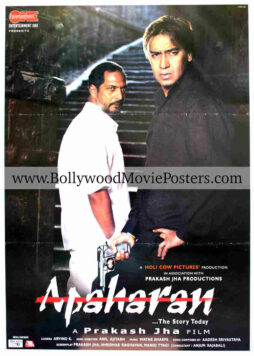 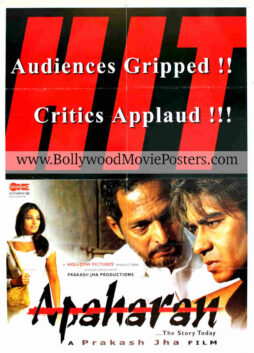 Listed here for sale is an original Bollywood movie poster of the cult Hindi film, Apaharan (2005) for sale.

Based on the harsh realities of the kidnapping industry in Bihar (also called “Jungle Raj”), Apaharan bagged the 2006 National Film Awards for Best Screenplay and the Filmfare Awards for Best Dialogue (Prakash Jha) and Best Villain (Nana Patekar).

The film is remembered as one of Prakash Jha’s finest, making this Apaharan poster highly collectible!

Printed and circulated during the first theatrical release of the film in 2005, this glossy Ajay Devgan old movie poster was originally designed for publicity of the film but never ended up being used.

A stunning close up of the two lead stars, Ajay Devgn and Nana Patekar, taken from the climax of the film is seen prominently on this Apaharan movie poster. A full length still photograph of actress Bipasha Basu appears on the left of the poster. Typography used in this Ajay Devgan old movie poster is completely in English. The title is seen in a running black font with a streak of red striking through it.