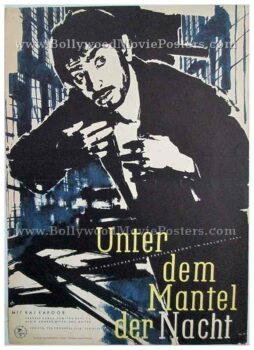 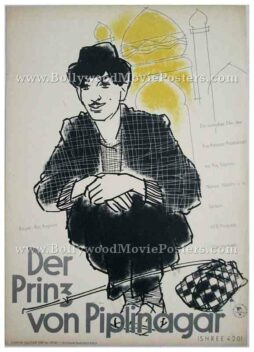 This is an actual surviving original East German publicity poster of the 1951 black and white Bollywood film produced, directed by and starring the greatest entertainer of all time in Bollywood, Raj Kapoor (also known as The Show Man of Indian cinema).

This extremely unique promotional mini-poster (roughly A4 size) was designed and printed in East Germany during the Cold War for publicity of Awara in East German theaters.

This old hand painted Bollywood poster bears an extremely unique design that features a brilliant hand painted portrait of Raj Kapoor & Nargis holding hands. The title of the film is seen in German as well as translated into English in brackets below.

This is the only film ever made in the history of Bollywood that had so many generations of the Kapoor family starring together on screen!