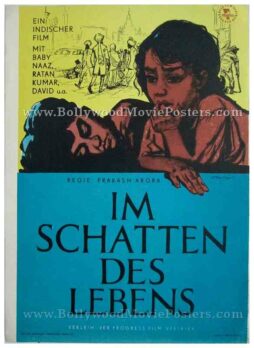 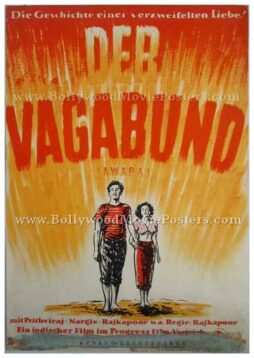 This is an actual surviving original East German publicity poster of the 1956 black and white Bollywood film produced by and starring the greatest entertainer of all time in Bollywood, Raj Kapoor (also known as The Show Man of Indian cinema).

This extremely unique promotional mini-poster (roughly A4 size) was designed and printed in East Germany during the Cold War for publicity of Jagte Raho in East German theaters.

This old hand painted Bollywood film poster bears an extremely unique design that features a brilliant hand painted portrait of Raj Kapoor. In this poster, the artist has tried to capture Raj Kapoor from an iconic scene in the film. He is seen attempting to drink water from a tap, before being spotted by a security guard. The city skyline in the night is seen in the backdrop.

Jagte Raho is a 1956 Bollywood film directed by Amit Maitra and Sombhu Mitra, produced by and starring Raj Kapoor. It was also produced in Bengali as Ek Din Raatre.