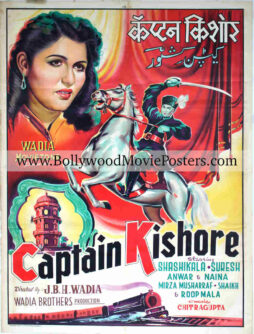 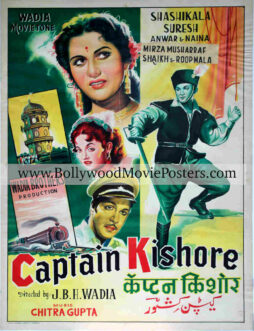 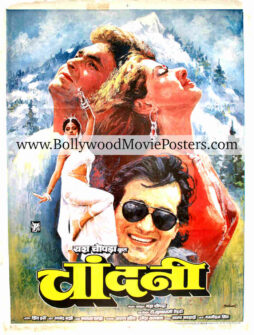 Printed and circulated during the initial release run of the film in theaters (somewhere in the late 1950s), this best old Bollywood poster was originally designed for publicity of the film but never ended up being used.

This Captain Kishore movie poster was originally hand painted on canvas by a poster design studio in Bombay. A large hand painted portrait of actress Shashikala is seen on the top. Actor Suresh is seen prominently in this best Bollywood poster for sale riding a horse and brandishing a sword.

The poster is set against a beautiful hand painted background that features a mix of red, yellow and orange. A tower is seen along with a steam train at the bottom of this vintage Bollywood poster. The title of the film appears in a very pleasing black font at the bottom, with the beginning letter of each word painted in red. A translation of the tile in Devanagari Hindi and Urdi is seen at the top of this best Bollywood poster in white and blue respectively.