View cart “Chhoti Bahen” has been added to your cart.
Checkout View Cart 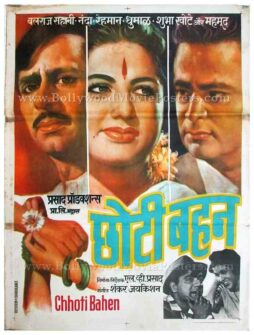 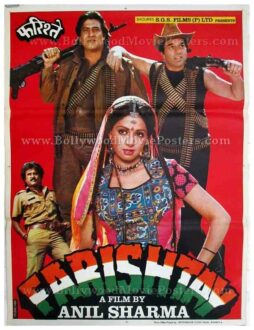 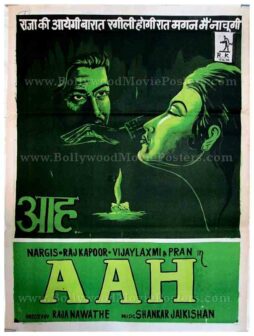 This is an actual surviving old poster of the 1959 Bollywood movie that was made in black and white. Starring actress Nanda, this poster was printed and circulated several years after the first release of the film (1970s). This hand painted old Bollywood movie poster was originally designed for publicity of the film but never ended up being used.

The poster was originally designed on a hand painted canvas and also features a black and white still photograph pasted on the bottom corner, making it a hybrid of sorts in terms of design techniques used. Large and realistic hand painted portraits of the lead actors are seen at the top. The poster features a distinctly feminine hand (seen wearing bangles) tying the bond of protection called “rakhi” on a male hand. This is symbolic to the Raksha Bandhan festival celebrated in India wherein a sister ties a bond of protection or a “rakhi” on her brother’s wrist. The typography used in this poster is entirely in Devanagari Hindi except for a translated English title on the bottom left.

Chhoti Bahen (Younger Sister) is a 1959 Hindi film that stars Nanda in the title role, and Balraj Sahni, Shyama and Rehman. The film is about two brothers doting over their younger sister. The music of the film is composed by the highly successful composer duo in Bollywood, Shankar-Jaikishan.