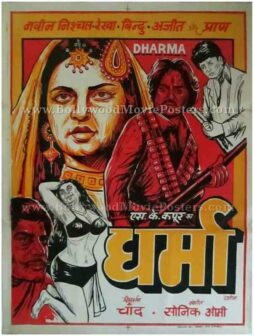 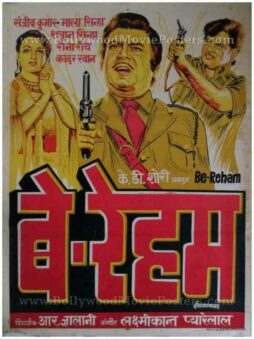 This is an actual surviving original Bollywood film poster for sale of the 1973 super hit Hindi film that starred Rekha, Navin Nishchol, Ajit, Pran and Bindu in prominent roles.

Printed and circulated during the initial release run of the film (somewhere in the mid 1970s), this original Bollywood movie poster was designed for publicity of the film but never ended up being used.

This old Bollywood movie poster was originally hand designed in oil on canvas format by an art studio in Bombay. Quirky hand drawn portraits of the lead actors are seen painted in bright colors in this original Bollywood film poster. The line drawing technique used by old school Bollywood poster painters is very obvious in the large close up portrait of actress Rekha seen prominently on the top left.

A combination of bright yellow and red is used in this old Bollywood poster, giving it a very catchy appearance.