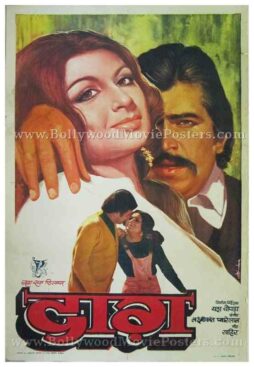 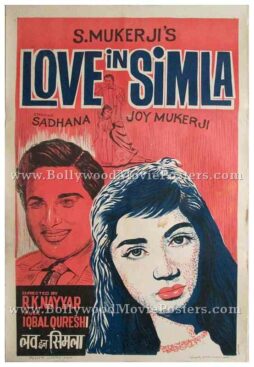 This is an actual surviving original vintage Bollywood movie poster of the 1959 Hindi film that was produced by B. R. Chopra and directed by the “King of Bollywood Romance,” Yash Chopra.

After working as an assistant director for several B. R. Chopra films like Naya Daur, Yash Chopra went on to begin his directorial career with Dhool Ka Phool. The film was based on a national integration theme and featured the classic song, “Tu Hindu banega na Musalman banega, Insaan ki aulaad hai Insaan banega.”

Printed and circulated during the first release run of the film (late 1950s), this old hand painted Bollywood movie poster was originally designed for publicity of the film but never ended up being used.

This vintage Bollywood movie poster features stunning hand painted artwork created by one of the greatest Bollywood poster designers of his time, V.G. Parchure of Pamart Studio. A stunning hand painted portrait of the lead couple Rajendra Kumar and Mala Sinha in a romantic pose is seen prominently on the poster. The poster is set against a red background.

Originally hand painted on canvas by master Bollywood poster painter V.G. Parchure, this vintage Bollywood poster bears his printed signature in the name of his art studio on the bottom right.