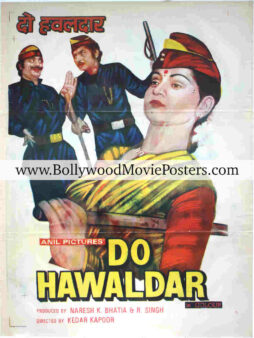 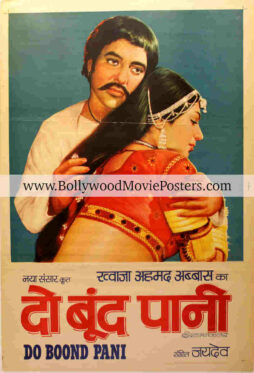 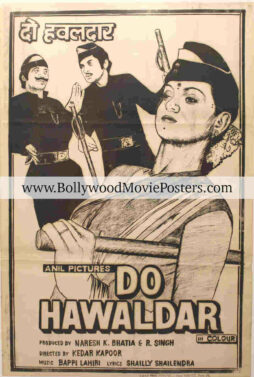 Printed and circulated during the release of the film in theaters (somewhere in the late 1970s / early 1980s), this old Delhi poster for sale was originally designed for publicity of the film but never ended up being used.

Do Hawaldar  was a remake of the blockbuster Marathi film, Pandu Hawaldar (1975) that starred Marathi film industry’s biggest star, Dada Kondke along with Ashok Saraf.

This Do Hawaldar poster was originally hand painted on canvas by a poster design studio in Delhi. Actress Zarina Wahab is seen wearing a police constable uniform in a large quirky hand drawn portrait prominently at the center. The two lead stars of the film, Asrani and Jagdeep are also seen in constable uniform in the background of this old Delhi poster for sale.

The poster is set against a minimal white background. Typography used in this Do Hawaldar movie poster is in English with a translation of the tile in Devanagari Hindi script at the top. The title of the film appears in a stunning yellow font at the bottom of this old Delhi poster for sale..