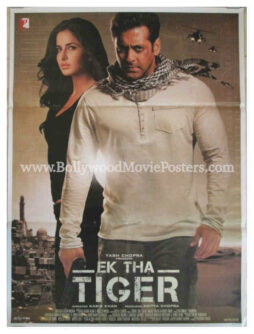 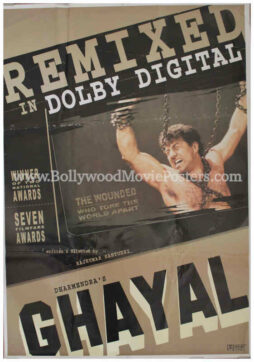 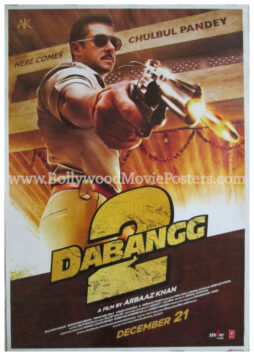 This is an actual surviving Salman Khan movie poster of the 2012 Hindi film that featured the superstar in the lead role opposite Katrina Kaif. Directed and co-written by Kabir Khan and produced by Aditya Chopra under the YRF banner, Ek Tha Tiger also starred Ranvir Shorey, Girish Karnad, Roshan Seth and Gavie Chahal in supporting roles.

Printed and circulated during the original first release of the film in 2012, this Ek Tha Tiger movie poster was designed for publicity of the film but never ended up being used.

The first installment in the Tiger franchise, Ek Tha Tiger was the highest grossing Indian film of 2012, setting the record for the biggest opening weekend collection. The Indian spy thriller was shot primarily in India, Cuba, Turkey, Ireland and Thailand.

Superstar Salman Khan is seen in a stunning photograph prominently in this Ek Tha Tiger poster. Actress Katrina Kaif is seen behind him in a side profile. The typography used in this Salman Khan movie poster is entirely in English. A city scape is seen in the background with helicopters flying in the sky above.

Ek Tha Tiger’s theme song “Mashallah” composed by Sajid–Wajid became an instant chart topper upon the album’s release and is fondly played till today. A sequel, “Tiger Zinda Hai,” was released in 2017.