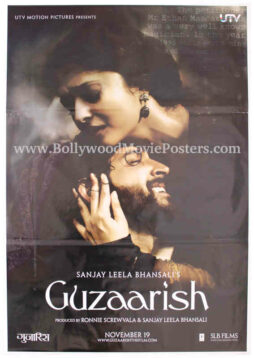 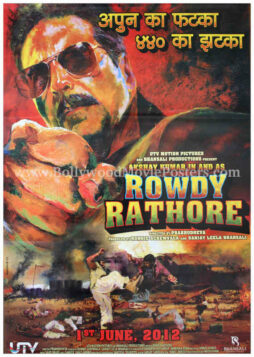 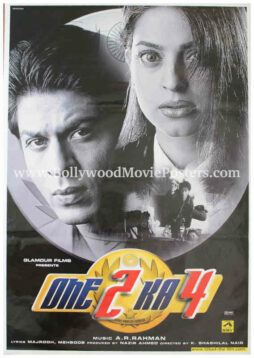 This is an actual surviving original Hrithik Roshan poster of the 2010 Hindi film that featured the dancing star of Bollywood in the lead role opposite Miss World 1994, actress Aishwarya Rai Bachchan.

Printed and circulated during the debut of the film (somewhere in 2010), this glossy Guzaarish poster was originally designed for publicity of the film but never ended up being used.

Guzaarish was the first Bollywood film to be based entirely on the subject of euthanasia, making this Hrithik Roshan poster highly collectible!

A stunning photograph of Aishwarya Rai embracing Hrithik Roshan is seen in this minimal Bollywood poster. The poster is set against a black background with typography appearing completely in English.

Sanjay Leela Bhansali made his debut as a music composer with Guzaarish. The album is fondly remembered till today, especially for the song “Udi” sung by Sunidhi Chauhan which featured a stunning performance by Aishwarya Rai Bachchan.

The screenplay of Guzaarish finds a place in the Library of the Academy of Motion Picture Arts & Sciences as a part of its permanent script collection.