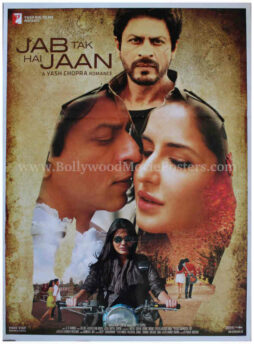 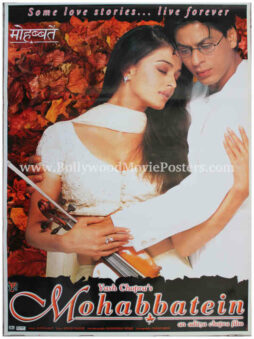 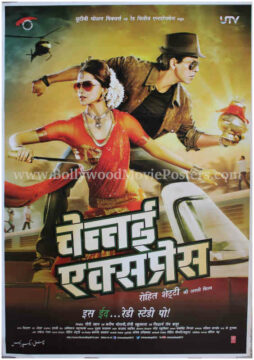 This is an actual surviving SRK poster of the 2012 Hindi film directed by Yash Chopra that featured the “King of Bollywood,” superstar Shahrukh Khan in the lead role along with Katrina Kaif and Anushka Sharma in supporting roles.

Printed and circulated during the original first release of the film somewhere in the year 2012, this SRK poster was originally designed for publicity of the film but never ended up being used.

A stunning design is used in this SRK poster to depict the chemistry between superstar Shahrukh Khan and actress Katrina Kaif. The two are seen in a romantic picture which is encased inside a body silhouette of the actor. The English actress is seen in another still photograph from the film riding a bike at the bottom of this Katrina Kaif poster.

Written and produced by Aditya Chopra under the Yash Raj Films banner, Jab Tak Hai Jaan was the highest-grossing Bollywood film overseas for 2012, and the third-highest-grossing Bollywood film of the year, after Ek Tha Tiger and Dabangg. Jab Tak Hai Jaan received a number of awards, including four Filmfare Awards, most notably Best Supporting Actress for Anushka Sharma and Best Lyrics for Gulzar.