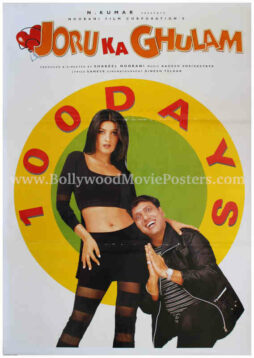 This is an actual surviving classic Govinda film poster of the Hindi comedy released in the year 2000 that featured the “Mass entertainer of Bollywood” superstar Govinda and actress Twinkle Khanna in lead roles. Kader Khan and Johnny Lever played supporting roles in the film.

Printed and circulated 100 days after the original release of the film (somewhere in the year 2000), this Joru Ka Ghulam movie poster was originally designed for publicity of a milestone achieved during the successful theatrical run of the film but never ended up being used.

Fondly referred to as “Chichi” by his fans, superstar Govinda is seen flashing his characteristic full mouthed smile in this hilarious Bollywood poster. He is seen with his hands folded kneeling before actress Twinkle Khanna, who plays his wife in the film. His pose along with the title “Joru Ka Ghulam,” give away the plot of the film in this Govinda poster. This Joru Ka Ghulam picture of Govinda and Twinkle Khanna is encased in a bright circle that says “100 Days” marking the successful completion of a milestone in the film’s theatrical run in cinemas.

The title of the film features an interesting logo – a heart with a key tied around it. This Joru Ka Ghulam poster movie features a plain white background, which makes the two actors who are wearing black outfits, stand out.

Joru Ka Ghulam is remembered for its catchy soundtrack, mainly for the title song “Joru Ka Ghulam” sung by Abhijeet and Sunidhi Chauhan.