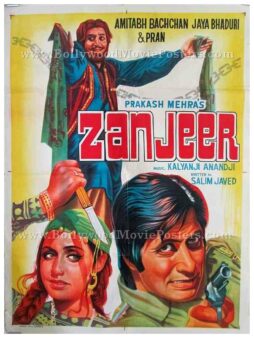 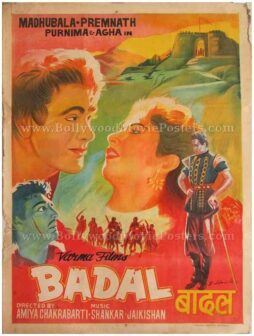 This is an actual surviving publicity poster featuring the ultimate method actor of Bollywood Dilip Kumar in his first stellar performance, making it highly collectible.

This landmark film was the first major hit for Dilip Kumar who went on to become one of Bollywood’s biggest sensations in the years to come.

This rare Bollywood poster was originally designed on a hand painted canvas by a well know Bollywood poster painter. Stunning portraits of lead actors Dilip Kumar and Noor Jehan are seen set against a light orange background. The title of the film appears in English with translations into the two major regional languages, Devanagari Hindi and Urdu appearing alongside.

Jugnu is a 1947 Bollywood movie starring the Tragedy King of Bollywood, Dilip Kumar & Noor Jehan in lead roles. The film also features singing superstar Mohammed Rafi as an actor in a small role.

Jugnu was released during India’s independence. The director of Jugnu, Shaukat Hussain Rizvi and his wife actress Noor Jehan settled in Pakistan shortly after the film was released.