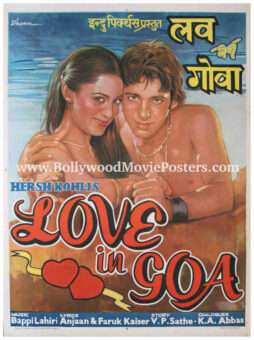 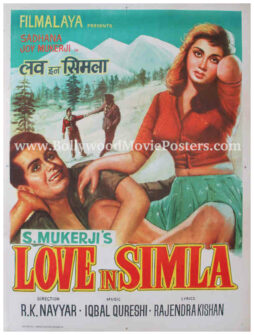 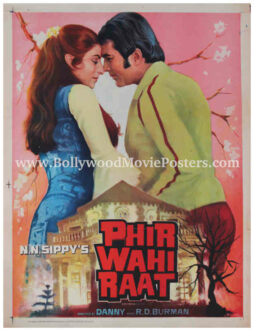 This is an actual surviving original vintage film poster of the 1983 romantic Bollywood movie shot in Goa that starred Mayur Verma and Anuradha Patel in lead roles. Directed by Harsh Kohli, the film also featured Ashok Kumar and Om Prakash in supporting roles.

Printed and circulated during the first release of the film (somewhere in 1983), this Bollywood Goa movies poster was printed for publicity of the film but never ended up being used.

Love in Goa was based on the teenage love story of a Catholic girl from Goa and a Hindu boy.

Stunning portraits of the lead couple Mayur Verma and Anuradha Patel are seen prominently in the poster set against a beach backdrop of Goa. They appear smiling and posing for the camera in this Love in Goa movie poster. Two hearts are seen intertwined with a ribbon at the bottom.

The typography used in this vintage Bollywood Goa poster appears in Devanagari Hindi on the top and in English at the bottom. The title of the film is seen hand painted in striking red font in English and again in yellow in Hindi, giving this Bollywood poster an extremely eye catching appeal.

Goan tiatrist Rosario Alfred Fernandes (more popularly known by his stage name “Alfred Rose”) sang and composed the hit English-Konkani song “Come On Sing” in the film. The song is fondly remembered as one of his finest works in his illustrious career during which he is believed to have sung over 5,000 Konkani songs.