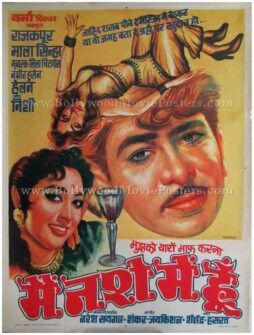 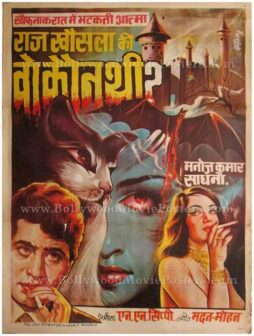 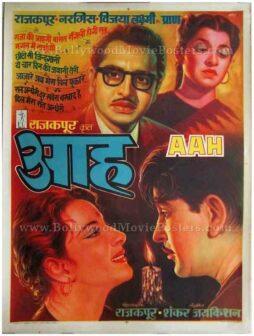 This is an original Bollywood poster of the 1959 Hindi film that featured the showman of Indian cinema, Raj Kapoor in the lead role along with Mala Sinha.

Printed and circulated during the first release of the film (Late 1950s), this rare Raj Kapoor movie poster was originally designed for publicity of the film but never ended up being used.

This beautifully hand painted Bollywood poster features a stunning close up portrait of Raj Kapoor. The object of his affection appears inverted and juxtaposed over his head, signifying his obsession for her. A glass of alcohol is seen at the bottom, giving away the plot of the film. Artist Manohar’s signature is seen on the center right corner of the poster. The lettering in this old Raj Kapoor movie poster is completely in Devanagari Hindi. The title of the movie appears at the bottom along with the words, “Friends please forgive me … for I am drunk.”