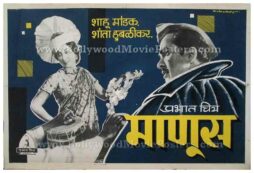 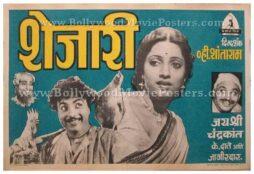 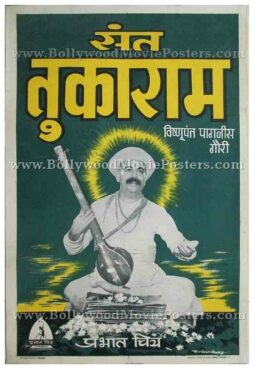 This is an actual surviving original old Marathi movie poster of the 1939 film which was produced by Prabhat Film Company and directed by legendary filmmaker, V. Shantaram.

This old Marathi movie poster has been designed by using iconic black and white photographic stills from the film. Shahu Modak is seen as a police constable on the right whereas Shanta Hublikar appears in the character of a prostitute in this extremely rare old Marathi movie poster. The iconic Prabhat Film Company logo is seen on the bottom left hand corner that reads, “It’s Prabhat.”

Manoos (also called “Life’s for Living”) was based on a short story called “The Police Constable”. Considered one of V. Shantram’s finest films on social themes, Manoos told the story of an honest policemen who falls in love with a prostitute and attempts to rehabilitate her. With the film’s stellar success, it was subsequently released in Hindi as “Aadmi.”